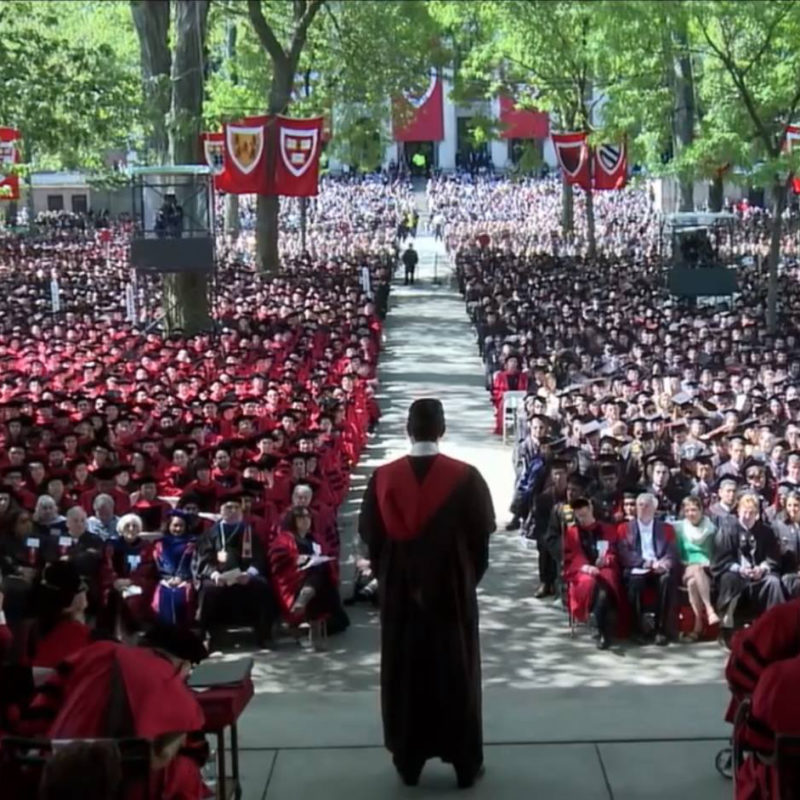 Come on! You can do it! Just one more step! Yay! You did it! Many times, my husband and I said these words to our son, Philip. We were there for his first steps, first day of school, last day of college, and his wedding. Now we watch as he guides the steps of his own children.

When asked to write this article about how God has ordered Philip’s steps through life, Harvard, and beyond, his own words came to my mind: “You don’t have to understand the destination—you just have to take another step.” This is how he has always lived his life. Every step has been inspired by his deep love and strong faith in God. He is a dreamer, a doer, and gives 110 percent of himself to the work of God.

My husband and I dedicated Philip to God when he was a baby. We felt peace knowing God would be directing his steps from that day forward. Our family has always been committed to ministry and Christian education. We feel blessed to have provided this strong foundation and believe it has helped guide Philip’s every step.

There is no doubt our steps are divinely intertwined with those from previous generations. Philip was born a year after the tragic loss of my father. He never met his grandpa, but I clearly see Philip walking in his footprints. He loves God, people, and adventure—just like my daddy.

As a child, Philip was always looking for ways to make others’ lives better. I remember him saying, “Mom, do we have enough food left over to make Bob a plate?” Bob was a lonely widower and World War II vet (just like my dad) who lived across the street from our house. Philip spent many afternoons listening to Bob’s stories and encouraging him.

I remember Philip discussing with us why he needed to quit his first job at a local grocery store. He said, “Mom, I see thirty-year employees who seem miserable, doing the same thing every day, looking forward to retirement or hoping to become manager someday. But the manager seems so miserable. Is that really all there is?” He became an entrepreneur that day and has never looked back.

After completing junior college and three degrees with a 4.0 GPA, he married Rachelle, the love of his life. She quickly joined in the steps God had planned for their lives. They served as youth pastors during the first years of marriage. Their big dreams and creative ideas inspired many. During this time, God directed them to start several businesses and programs from Stanford University to many other locations. This work eventually led them to Harvard University. Feeling a call to public service and higher education, Philip took a bold step and applied.

This quote describes the steps in which God would direct them over the next few years: “Be comfortable with uncomfortable. Find the limits—then go past them” (Philip Harding).

We knew in our hearts that Philip would not just “attend” Harvard but would give his normal 110 percent. And he did. While living three thousand miles away in California, he was elected student president of Harvard Extension School. A first. This led to their move across country to Cambridge, Massachusetts, and too many miles from family. However painful it felt, we kept cheering every step. Not long after moving to Harvard, Philip was elected president of the student council for all Harvard schools. This was an amazing learning experience!

Philip worked hard and was accepted into Harvard Kennedy School. Many incredible things happened during this time. Philip likes to call them “God Nods.” He graduated in 2014 with a master’s degree and was chosen to give the commencement speech in front of over thirty thousand attendees. At the conclusion of his speech, he challenged the graduates to “go serve the world with passion.” His words are on full display in his own life today.

After graduation, Philip was honored to be selected for a presidential fellow’s program that sent him to Washington, DC. Throughout this program, he stepped into new territory at the State Department, the Pentagon, White House, and other federal agencies.

When this program ended, the passion Philip had spoken about in his commencement speech pushed him to do more. After seeking God earnestly for next steps, God led him to cofound an organization with Stephen Drury called “Impact Junkie.” This organization has put into action Philip’s dream of loving people, going places, and changing lives. God’s blessing and favor has opened doors from the White House to the jungles of Central America.

Johns Hopkins University recently asked Philip to teach the Impact Junkie principles as a required course for graduate students. The US State Department asked him to speak on these same entrepreneurial and impact values in places like Uzbekistan, Guatemala, Turkey, Dubai, and Indonesia. Philip is using his experience of stepping out of his comfort zone to help others start impact-driven businesses and live out their passion, purpose, and calling.

Now suddenly, there are Impact Junkies all over the world—learning, sharing, and believing that they too can influence humanity for good, seeing their professional life connected to their high calling. You can visit ImpactJunkie.co and see that they are just getting started.

And to think it all began with just one big step of faith.

Anita Harding has been in full-time ministry with her husband, Gary, since 1976. She is the mother of two and “Mamaw” to seven. Her love and commitment to God, family, and friends shines brightly through her life. She currently serves as the Western District Ladies Ministries secretary.

Listening for His Whispers

Listening for His Whispers

A Divine Appointment in the Lunch Line

Great Is Thy Faithfulness