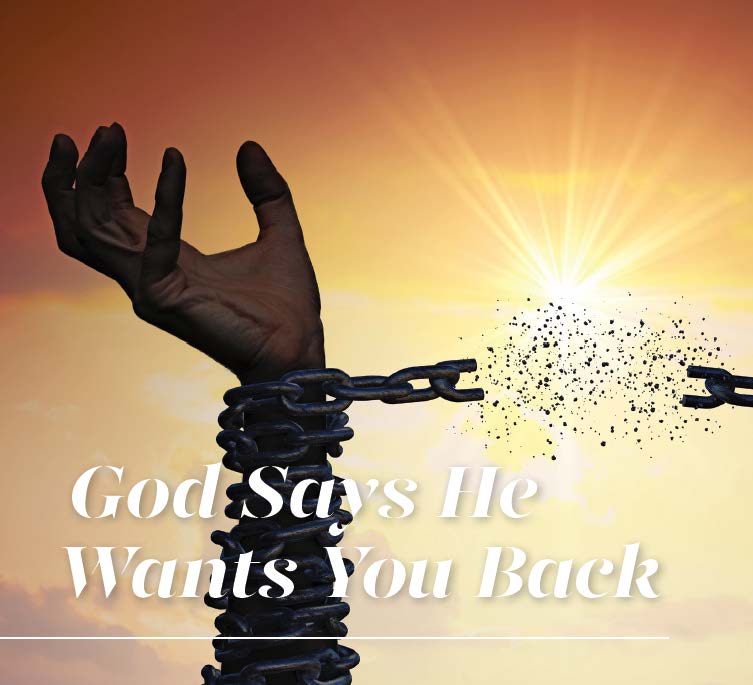 God Says He Wants You Back

“God says He wants you back.” These six words changed my life forever. I remember working for a major phone carrier where the work schedules were based on the workers’ seniority with the company. As a result, it took me five years to get the schedule I wanted. It was then I met a coworker who was temporarily placed on my team. This individual was the one who delivered the aforementioned words of hope and restoration.

Ten years prior, I’d made the decision that I wanted to live for myself and enjoy all that the world had to offer. In fact, if someone said that church was to the right, I would have gone to the left three times just to avoid it. At this time, I was in a two-year same-sex relationship and engaged to be married. But something was changing on the inside, and I suddenly began to pray a simple prayer every night: “Jesus, please don’t let me die and not make it into your Kingdom. Please don’t forget about me.”

Although I didn’t know it, God had already been working on me, both in the natural and in my spirit. For instance, I’d decided to go back to school. While searching for a college I believed would suit me, a coworker mentioned a certain school. I immediately was interested in enrolling and asked her to assist me with the enrollment process. She looked at me with shock and said, “Girl, you know this is a Christian school, right?” Actually no, I didn’t know it; however, by this time, it wasn’t a deal breaker for me.

One of the first required courses was Introduction to Biblical Survey. I hoped this course would be a generic course, staying far away from the topic of homosexuality. In all actuality, it really didn’t matter the topic; the Word of God brought so much conviction to my heart. To be honest, one of the hardest things I had to face was not just leaving the world but leaving a community of people. A community of people who proudly felt they were different and that heterosexuals were against them.

During my time in that class, the Word of God began to reshape and mold me, but I wasn’t sure into what. What I was certain about was that I wanted to please God. So, when I read the passage which admonished women not to wear anything associated with a man, I was overwhelmed with the reality of my situation. It seemed that others knew of this, including my coworker. I wanted to know more about God’s Word, so I called my aunt who I knew never wavered in her faith. I told her of the uncomfortableness in my spirit, to which she emphasized God’s displeasure about the life I was living.

I must admit that my aunt’s sentiments hurt, but I remained quiet as she continued to speak to me. After that conversation, I avoided speaking with her for several weeks. I then began to speak with my cousin, who just so happened to attend a United Pentecostal church. He went online and found a church that was only seven miles away from my house. We also briefly spoke about baptism in Jesus’ name. After our conversation, I called several family members, including my mother, asking them if they recalled me ever being baptized. No one could remember, but I was determined to be sure that I was baptized in the saving name of Christ.

Just like many people who come to an Apostolic church, I wanted to know exactly what their standards were when it came to apparel. As I searched for the information, I realized that it really didn’t matter—I wanted God! I went to a church service in my normal clothing at the time, which happened to be men’s clothing. I was nervous that the sermon would be on homosexuality since I was in the building. I wondered if it would be on a topic that would make me so uncomfortable that I would get up and leave.

Thankfully, the love I felt in that church was something I’d never experienced before. The people there made me feel welcomed. I was greeted with smiles, hugs, and several hellos. What was even better was the realization that they loved me without expecting anything from me in return. I sat in the pew crying as God began to deal with me. At the end of service, I walked to the altar and God completely transformed me.

On September 29, 2013, at Antioch Bible Fellowship Ministries in North Carolina, I was refilled with the Holy Ghost and baptized in Jesus’ name. Time passed and I eventually relocated to Florida. There, my family and the local United Pentecostal church, New Life Tabernacle, awaited my arrival. The church was extremely critical to my transition into a new life. I’m thankful for the leadership of the church who continue to encourage and check on me to this day. God truly took something that was dead and molded it into a masterpiece that only the Master could create.

Faint Adams is a visionary who has a passion to spread the gospel through her testimony as well as her clothing line, Chosen Vessels Apparel. Adams was recently inducted into the “30 Under 30” with the Apostolic Chamber of Commerce.

What’s Your Story? Our Darkest Hour

Christmastime at the Bernard Homestead